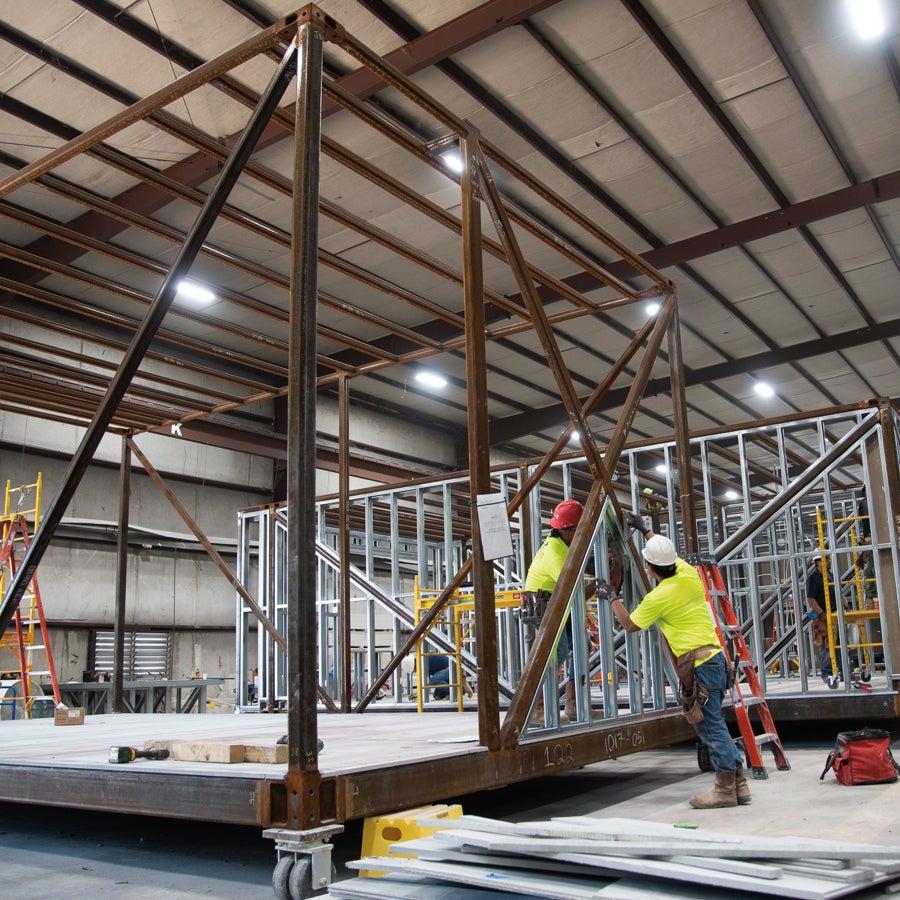 If you’re involved in construction, you know America is short on skilled tradespeople. Yet demand for buildings continues to grow. As a result, the industry must ﬁnd a way to get the work done with fewer hands. Experts say the solution is one that has already afforded signiﬁcant efficiencies to savvy building owners and accounts for up to 15% of total construction around the world: modular.

THE LABOR PROBLEM IS BIG … AND GROWING

The pool of construction workers is shrinking at both ends of the age spectrum. Trade school enrollment has declined in recent years, and the number of construction workers age 24 and under dropped by nearly 30% from 2005 to 2016, according to BuildZoom’s analysis of U.S. Census data. And older workers are leaving the industry in signiﬁcant numbers. Many who left their trades during the 2008 recession haven’t returned, and 41% of currently employed construction workers will retire by 2031. These factors combine to leave nearly 200,000 industry jobs unﬁlled, with more expected in the coming years.

The labor shortage impacts all states, but some feel it more than others. That’s because projects are concentrated in key, high-growth areas. In fact, a study from Global Data shows almost 60% of projects are in just 10 states — primarily California, Texas, New York and Florida. And as employment maps from the Bureau of Labor Statistics show, workers go where the work is. That means some states don’t have enough laborers to support new development, and regions experiencing rapid growth must compete for a limited labor pool.

With a shrinking number of construction workers concentrated in limited geographic areas, 70% of contractors struggle to find qualified workers to complete their projects. Firms compensate by making the most of the workers they do have — offering overtime hours to get the work done. But many have to transport workers from other areas (at significant cost) or hire lesser-skilled laborers (with significant risk). Plus, because labor rates continue to rise, delays increase project costs and budget / timeline risk. In some cases, the projects may lose their funding entirely.

Modular construction alleviates the problems associated with the labor shortage by allowing the work to happen where the workers are — in factories — rather than at job sites scattered across the country. Modular firms hire workers with the right skills, just like any employer, and schedule a steady stream of projects to keep workers busy. A single facility employs an average of 100 or more workers per shift and can build about 1-1.5million sq. ft. per year, or even more leveraging advanced manufacturing technology.

ON- AND OFF-SITE LABOR HAPPEN IN TANDEM

Modular construction requires some on-site work, to clear the land and lay the foundation. But one of the key benefits of the modular approach is that this foundational work can happen during module construction. The contractor simply pulls from two labor pools at the same time to get the job done faster.

Modules are made to move, so the facilities producing them are located near highways, railways or waterways for easy transit. And while a facility may be more than 500 miles from a job site, the location simply doesn’t matter because transit time is factored into project schedules. Plus, transporting modules costs far less than relocating a team of workers to a job site for several weeks or months. To minimize module transit costs and serve more customers, one off-site construction company — Z Modular — has built facilities throughout North America.

NO SHORTAGE OF LABOR OR QUALITY

Modular construction doesn’t just solve the labor shortage; it solves a wide range of problems with the labor itself. Modular workers enjoy:

All of these factors make modular construction much more appealing to younger generations than traditional construction. 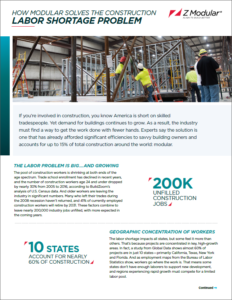